What Is the Relative Energy Deficiency in Sport (RED-S)?
You may or may not have heard of the term Relative Energy Deficiency in Sport or RED-S, but in 2014 the International Olympic Committee (IOC) published a consensus statement on RED-S (Mountjoy et al., 2014). In that consensus statement, the IOC defined RED-S as an impairment in physiological functions consisting of, but not limited to irregularities in metabolic rate, menstrual function, bone health, immunity, protein synthesis, and cardiovascular health (see image below). The underlying cause of RED-S is a deficiency in energy.  In other words, it is a deficiency in the balance between dietary energy intake and energy expenditure that is required for resting metabolism, activities of daily living, growth, and repair as well as the energy required for exercise and sports competition. Although it has similar health issues as the Female Athlete Triad it is considered a syndrome that affects a broader spectrum of physiological function, health, and athletic performance. It also differs from the Female Athlete Triad in that both males and females are susceptible to RED-S. 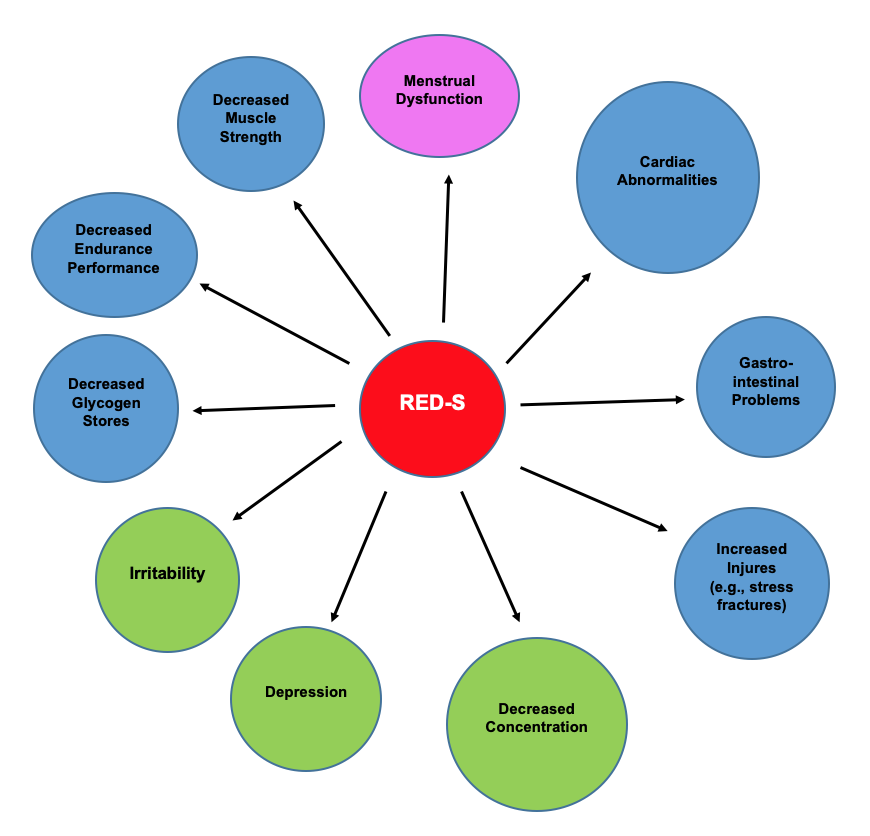 Who Is at Risk for RED-S?
Competitive athletes are at a higher risk than the more casual athlete due to a more rigorous training program and the competitive nature of these individuals. Athletes competing in endurance sports such as cross-country running or skiing, marathon, or triathlon, etc. are often at a higher risk for RED-S.  In addition, athletes who compete in aesthetic sports or weight class sports, like gymnastics, ballet, synchronized swimming, wrestling or martial arts, etc. are also at risk.

How Will RED-S Affect My Performance?
RED-S can impair health and sport performance by lowering total energy available not only for exercise and competition but also for general cell repair and metabolism. No matter what the sport, if an athlete’s muscles lack sufficient and proper fuel, performance will be impaired. The athlete may feel fatigue earlier and the lack of sufficient available energy can also affect heart function and breathing as well as an athlete’s ability to concentrate.

Like the Female Athlete Triad, RED-S can result in the loss of menstrual periods in females (purple circle on the image). Disruption in the menstrual cycle can lead to lower estrogen production, which can also affect bone loss as well as other physiological functions.

What Are the Warning Signs of RED-S?
There are a number of physical signs and symptoms such as: amenorrhea, hypothermia (cold intolerance), overuse injuries (stress fractures) as well as muscle cramps and weakness (blue circles on the image). In addition, there are also a number of psychological signs and symptoms such as difficulty concentrating, preoccupation with weight, and eating (green circles on the image). Many of these symptoms are similar to those of the Female Athlete Triad, however, a number of these symptoms are now appearing in males as well as females.

Prevention and Treatment Recommendations
Since the RED-S is a multifactorial issue, the prevention and treatment of it should employ a multidisciplinary team. This team should include a physician or other health-care provider (physician’s assistant or nurse practitioner), a registered dietitian, and for athletes with disordered eating or an eating disorder, a mental health practitioner as well as coaches and trainers.

Dual X-ray absorptiometry (DXA) scans can also play an important role in the prevention and treatment of RED-S. Accurate and precise body composition measurements, including bone mineral density, can help the treatment team monitor changes, and ideally, improvements, over time. In addition, by using DXA scans and software such as Dexalytics it is possible to estimate resting energy requirements, which account for approximately 60% of an athlete’s energy needs.  By combining the resting energy requirements with the caloric expenditure for activities of daily living and exercise training it is possible to accurately estimate total energy needs for an athlete. Giving athletes, coaches, and training staff information about daily energy intake needs.

Ultimately, early identification and education are keys to successful treatment of RED-S. Athletes should be educated about the consequence of RED-S such as the risk of impaired bone mineral accrual, declining bone mineral density, increased risk of injury, etc. Finally, DXA scanning can be helpful in the treatment and monitoring of this syndrome.