THE INJURY
In late March 2019, I was playing in a recreational volleyball game. In the third set, I went to sprint for a ball. All of a sudden, I was on the ground. I looked up thinking someone tripped me, but there was absolutely no one around me. Then I thought maybe someone hit me in the back of the leg with a volleyball from one of the other games going on but there was no volleyball around me. Then, I felt my muscle in my lower right leg start to roll up and I knew - I just tore my Achilles!

SURGERY AND RECOVERY
With Achilles ruptures, there are two paths of recovery: surgery or a non-surgical route of being in a cast and having the tendon reconnect and heal on its own. After getting an MRI, I learned my tendon had completely separated by approximately 1.5 inches. Because of that, surgery was strongly recommended for me.

After surgery, I was put in a cast with my toe pointed to relieve tension on my tendon. Then, every two weeks I was re-cast with a little more stretch put on my lower leg and tendon. After 6 weeks of being in the cast, it came off for good on April 23 and I was then in a boot for a month. In the boot, I started with 3 half-inch heel raisers in the boot to relieve tension and each week I was to remove a raiser. Just by removing a half-inch raiser felt like the biggest stretch in the world in my lower leg and I would be very sore at the end of the day for the first couple of days until I adapted to that new stretch. Two days after getting my cast off, I started physical therapy and was on the path to recovery.

I was scanned a week after surgery, right before getting the cast off and right after, and then every 3 months after that until a year post-surgery. During the time of being in the cast and boot, I lost 1.3 kg (3.0 lb) of weight. As you can see in the next two figures, most of the weight lost came from a decrease in lean mass (1.0 kg or 2.2 lb). Then during my time of recovery with physical therapy, I was able to gain back the lean mass I lost and more. From the time of getting out of the boot, lean mass increased 3 kg (6.7 lb). Overall, from March 2019 to March 2020 there was an increase of lean mass of 2.1 kg (4.6 lb). 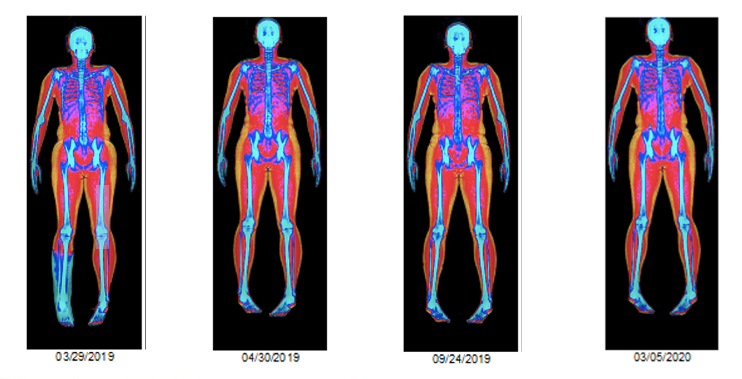 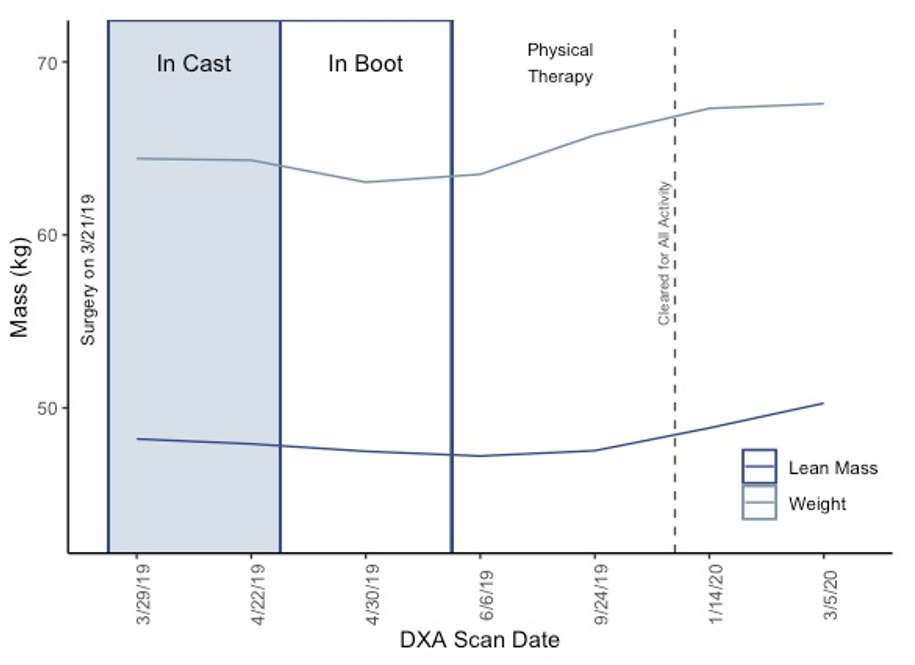 Initially, I was told it would be somewhere between 6 -12 months from my surgery date before I could try running again. So, from the middle of May 2019, my focus was gaining muscle and strength back in my lower leg. Around June I was finally walking with a normal gait, but my leg would be extremely sore at the end of the day. As muscular imbalances can lead to chronic injuries and increases risk of re-injury, this was something I was focused on during my recovery.

What is interesting is that as the lean mass in my right leg (surgical leg) decreased steadily (loss of 1.2 kg or 2.7 lb) from the time of injury to getting out of the boot, the leg lean mass in my nonsurgical leg (left leg) also decreased slightly during the time of being in the cast and then increased during the time while I was in the boot (figure below). This is most likely due to overcompensation of the injury on my right leg as I was only using my left leg to push myself on the scooter and to walk with crutches. Then during physical therapy and return to all activity, both legs increased in lean mass back to approximately the level of the year previous.

During immobilization, there can also be an increase in fat mass locally in the area of immobilization or throughout the whole body (Addison, Marcus, Lastayo, & Ryan, 2014). Although I cycled on a recumbent bike regularly, performed upper body weightlifting exercises, and core exercises, fat mass in my right leg still increased during the time of being in the cast and was higher than my left leg throughout the year after injury due to the extended period of immobilization. 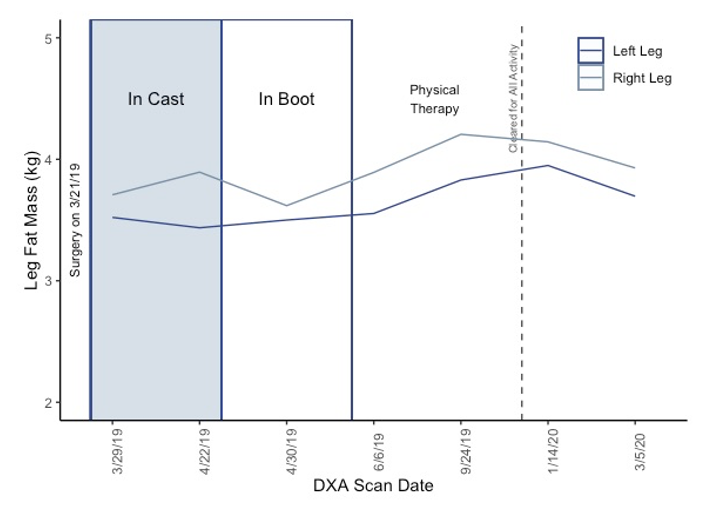 Another concern with immobilization is the decrease in bone mass due to lack of weight-bearing (Minaire, 1989; Therbo, Petersen, Nielsen, & Lund, 2003). As seen in the figure below comparing right and left leg bone mineral content (BMC), my right leg decreased in BMC steadily throughout 12 months post-surgery. From the time of being in the boot to September, my left leg maintained BMC levels and this is most likely due to favoring my left leg and putting full weight on my left leg. While my left leg also slightly decreased in BMC from September 2019 to March 2020, it was not nearly as much as my injured leg. Overall, the decrease in BMC is most likely due to decreased activity overall and specifically high-impact weight-bearing exercise (Creighton, Morgan, Boardley, & Brolinson, 2001). 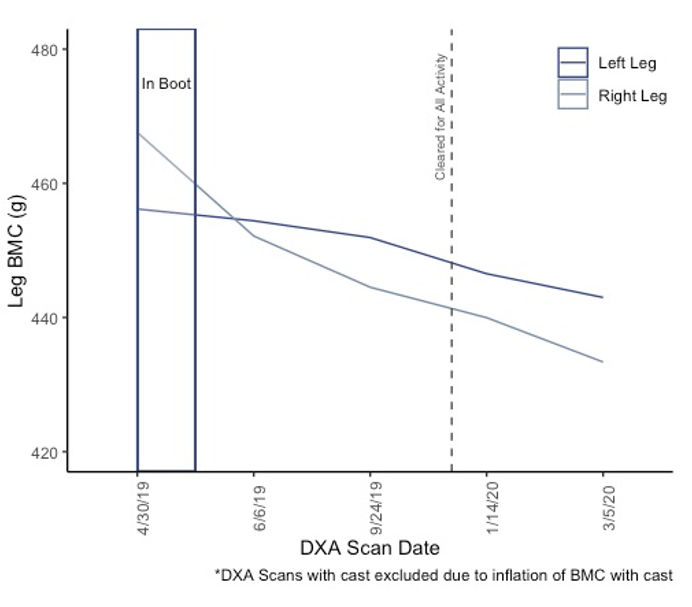 TAKE HOME MESSAGE
During an injury, rehabilitation, return to activities, and tracking body composition via DXA is an ideal tool to track changes in lean, fat, and bone mass during times of immobilization when atrophy, or loss of lean mass, can occur. Accordingly, DXA compliments other measures of recovery such as strength, endurance, and range of motion tests. Overall, quantifying body composition can be beneficial for coaches, athletic trainers, and practitioners in all populations to help determine rehabilitation and training programs.

About the Author: Erica Roelofs, M.S., is a doctoral student in the School of Kinesiology at the University of Minnesota.